Gerben van Giessen has been growing Phalaenopsis since 2008 under the name Butterfly Orchids. The company is situated in the Dutch town of Andel and on its 34,000 m² facility more than 2 million Phalaenopsis are produced every year for the European sales market. In 2015, Butterfly Orchids introduced the water buffer system Undrcover®, which was developed in collaboration with StudioBlauw, on the Royal Flora Holland Trade Fair in Aalsmeer. Now, more than a year later, we are interested to hear about his experiences with Undrcover.

What were the reasons behind the launch of Undrcover?
At the Anthura Relation Day in May 2015, Marco van Herk gave a presentation about irrigation systems. The idea that the plant can absorb water according to its own needs, thus preventing “drought stress”, was very appealing to me. The consumer wants to water the plant, but does not know how much and how often.

Back home, I called Wahing Lee from StudioBlauw with the idea of developing together a universal water buffer system. Besides the fact that I have good experiences with StudioBlauw in terms of marketing (the entire corporate identity of Butterfly Orchids is designed by StudioBlauw), I consciously opted for an external party to develop the water buffer system. By outsourcing, it will be accessible to multiple growers and products and it will create support in the market. 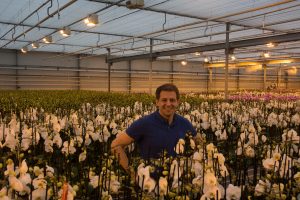 What exactly does the Undrcover concept entail?
Plants often die because of insufficient or excessive watering. Undrcover offers a solution for this problem. Undrcover consists of a system in which the plant receives water according to its needs by means of a small wick. This natural principle is also called capillary action.

The plant receives exactly the amount of water it needs. We developed a special pot for the existing cultivation pot with the wick. This ensures that at the bottom of the pot some space is left for a water buffer. You only need to make sure that the water level does not get too low. Easy, isn’t it?

In order to hide the water buffer system, we developed beautiful covers that match each interior. These covers also have a useful window to monitor the water level. The system is currently available for the 12 cm pot size. 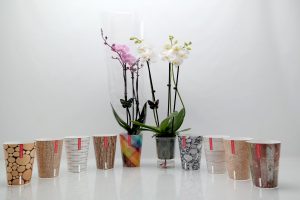 How has the trade reacted to the Undrcover concept?
Most of the trade still prefers the standard. They do not have extra money for an irrigation system. The strength of Undrcover is that it combines a water buffer system with a trendy pot cover. The trade considers this as “added value” and in that case it may cost extra money.

It still happens that the trade only finds out later that they bought a plant with a water buffer system. The concept is increasingly well-known, also because we have been supplying via the auction clock since week 32-2016. Meanwhile 30%-40% of all our plants leave the company with Undrcover. It is mainly bought by companies that want to distinguish themselves in the field of quality and ease for the consumer.

What are the additional costs of the Undrcover concept?
The exact costs are hard to determine, since they depend on the size of the order and how efficiently labour is dealt with. A gross price indication for a water buffer system only is €0.20 – €0.30 (including labour). Depending on design costs and copies, the ‘pre-tax’ price for a pot cover amounts to €0.14 – €0.25. The additional costs for the total Undrcover concept range from €0.40 to €0.70 per plant including labour.

How do you see the future of the Undrcover concept?
Besides Butterfly Orchids, Undercover has also started to collaborate with Anthuriumkwekerij de Groene Tint and the nursery Van der Voort Potplanten associated with Decorum.

In order to further expand the introduction and development of the new irrigation system, Undrcover will start to collaborate with Modiform.

I am looking forward with confidence to the future of the Undrcover concept!

Anthurinfo
This article is part of the Anthurinfo nr 1 – 2017. Read all articles here.