Healthy water as a basis for healthy cultivation

Healthy irrigation water is of vital importance for healthy cultivation and a sound business. Fungal or bacterial infection in the plant, growth stagnation or impaired root growth is increasingly linked to irrigation with unhealthy (contaminated) water.

Increased losses due to fungi like Fusarium and Pythium or bacteria such as Acidovorax (Phalaenopsis) should lead to a check of the irrigation water. Analyses of irrigation water or basin water can demonstrate that the water is contaminated by a large amount of fungi and bacteria.

In many cases, increased losses or longterm problems with root quality could have been prevented if the irrigation water had been checked regularly for the presence of these germs.

Water always contains a host of fungi and bacteria. In many cases, the risk of infection is small if they appear in normal amounts. Problems arise when the germs increase in number. This not only gives rise to an increased risk of infection from these germs, but if there is any deterioration in the root environment, the harmful fungi can also prevail in the substrate. These include fungi such as Rhizoctonia and Athelia rolfsii. In addition, problems can arise with the uptake of certain nutrients. 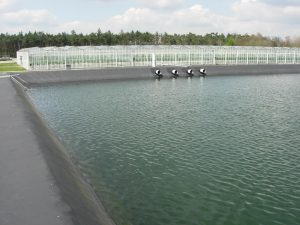 Basin
Clean water begins with the storage of the irrigation water (mostly rainwater). In open basins, the water can be contaminated from the outside by people and animals (birds, insects, etc.). In particular, all different kinds of algae can grow rampantly because of the light in the water. The water is further heated by sunlight, promoting the growth of algae, fungi and bacteria.

This also applies to the 100 m³ of water that can be left in a silo. The oxygen level falls and sometimes it is so low that aerobic bacteria are not able to develop any further and even die. On anaerobic organisms, the oxygen level in the water has no impact on the growth and propagation, so that these (often negative) bacteria prevail.

Recirculation
Most growers recirculate their drain water. In the Phalaenopsis cultivation, lots of growers have started with recirculation this year. The water collected has run over the leaf, along the root and through the substrate, picking up lots of bacteria and fungi along the way. By reusing this water again and again, there is a good chance that the infection pressure increases. 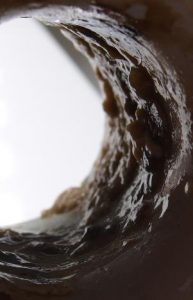 Slime formation in a pipe

Slime formation in water pipes
In many cultivations, slime formation in pipes is the catch. Often, the amount of biofilm that can form in an irrigation pipe in a year is startling, especially at the end of the pipe and in other ‘dead’ parts of the pipes where a lot of dirt can build up in a short time. After a few years, new pipes can look like the one shown in the picture.

The formation of biofilm in the pipe system is often a source of infection that is hard to tackle. The biofilm forms a protective layer over the germs which make them difficult to reach by most disinfectants. Although pipes seem to be clean, a dangerous biofilm can still be present (a biofilm can be 10 to 20 microns thick), in which bacteria and fungi find a breeding ground. The water that is disinfected by, for instance, a heater or UV installation is infected anyway along the way to the plant. And, as already mentioned, the growth of the pathogens can rapidly increase in still water.

Fertilisers
Bacteria and fungi also need nutrients to grow, particularly nitrogen. An increase of nitrogen can speed up the growth of germs. Increased ammonium or urea can deplete water quality because more oxygen is extracted, which is necessary for the conversion of these fertilisers.

Healthy water
The above points of attention are not an exhaustive list, although they do point to a number of measures necessary to keep the water healthy.

Basin and silo
It is advisable to cover the basin. There is still a small risk of infection by people and animals, but the growth of algae will be prevented. This will also result in less dead material (sludge) on the floor of the basin. The same also applies for the inside and outside of silos. Cover the silo with a lightproof canvas.

Contamination builds up at the bottom of basins and silos. It is necessary to remove this sludge regularly and clean the silo. When building a silo, pay attention to this detail. Let the floor of the silo slope down towards the centre and make an opening in the middle of the silo canvas that is connected to a discharge pipe. When the silo is nearly empty, the contamination can easily be washed away through this drainage.

Water flow
In order to keep control over water quality, it is necessary to know how the water flows in the company. Make a schematic drawing of the water flow of the basin (or silos) via the pipes towards the plant. It is important to depict the taps and valves on the pipes and in the silos. It might be the case that because of a poorly closed valve or tap, unhealthy water flows unexpectedly from one silo to another silo or water pipe.

Water treatment
The most important measure is to treat the water. Water treatment entails cleansing the water of any impurities it might contain, such as contaminants and micro-organisms (germs). The germs are removed from the water by means of disinfection.

A lot of companies decontaminate (disinfect) the irrigation water by heating or UV. For pot and cut Anthurium growers, recirculating and disinfecting the irrigation water has been an effective way to kill germs in the drain/return water for many years. In addition to this, several disinfectants are used like chlorine or copper and silver ions.

Besides disinfection, it is also necessary to clean the water. Surfaces and walls of equipment and irrigation or drip irrigation pipes should be cleared of unwanted contamination and biofilm.

It is important to know that the appearance of biofilm in pipes is not prevented when the water is disinfected with a UV installation or by adding chlorine. To kill the germs in the water and to remove the biofilm, a powerful oxidizing agent is required in the water. The three best-known oxidizing agentsin the horticultural industry are chlorine  dioxide, hydrogen peroxide and ozone.

From a practical point of view, dosing hydrogen peroxide (H2O2) is the most attractive option (see chart for adding H2O2). In principle, H2O2 is a more powerful oxidizing agent than chlorine dioxide. Often, H2O2 is added in a higher dosage to the water. A disadvantage of hydrogen peroxide is that this oxidizing agent is quickly fully reacted (oxidized) and splits into in H2O and O2.

There are other products available (for instance, Hydrocare and Huwa-san) in which a minimum quantity of silver chelate has been added to H2O2, resulting in the stabilisation of H2O2. As a result, the H2O2 keeps oxidizing for longer and has a much better disinfection and cleaning effect.

The chart and graph below (source: Intracare) show a number of measurements of water in irrigation pipes of an orchid grower and also clearly shows that shortly after administering stabilized H2O2 the number of germs has fallen to almost zero.

ATP measurements in water before and after the administration of Hydrocare. (source: Intracare – www.intracare.nl) 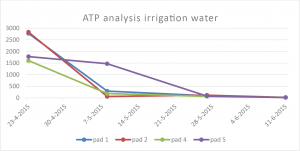 ATP measurements in irrigation water before and after applying Hydrocare (Source: Intracare) 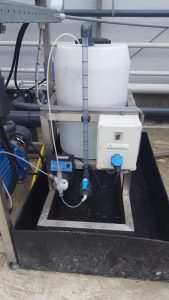 Installation of administration of H2O2

Chart for administration of H2O2

The most effective and reliable way of adding a concentration of H2O2 to the water is injecting the product directly into the main tube. The installation is fairly simple.

Data:  The pump should be able to pulse a minimum of 10 ppm (parts per million) and a maximum of 200 ppm. A capacity of 150 pulses per minute is the minimum requirement. The minimum and maximum pulse length (amount of ml) depends on the water volume that passes through the pipe per time unit. In many cases, a pump is required which gives 2 to 5 l/hour.

Calculation: The flow during irrigation is 400 litres per minute. The pulse pump has a maximum capacity of 180 pulses per minute.

It is possible to add the hydrogen peroxide to the fertiliser solution in the B container. Because the H2O2 starts to oxidize, the concentration in the irrigation water is not stable. We do not recommend this application for the longer term. Do not add the H2O2 under any circumstances to the fertiliser container in which the trace elements are present. Chelates are
decomposed by the oxidizing agent.

Step-by-step plan
In order to keep your finger on the pulse in practice and to be sure that the irrigation water is and stays healthy, some action points are mentioned below. The points are divided into a step-by-step plan consisting of three steps: namely control, analysis and measures. 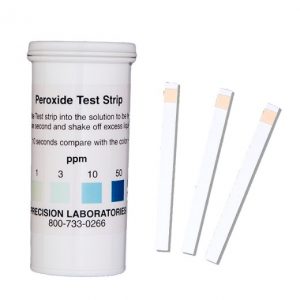 Fungi concentration in drain water during one year. Pythium is found regularly (orange bar). Next to it Fusarium (black bar) and Cylindrocarpon (green bar).

This information and checklist gives you the tools to incorporate even more security measures for a healthy cultivation and a sound business. Healthy irrigation water is of vital importance!

This article was written in collaboration with Bureau IMAC. Should you require more information on this subject, please contact Bureau IMAC.