On Saturday 9th July, Liselore Frowijn presented her new collection ‘Afropolitan’ in the Gashouderfabriek. The tropical flowers and plants provided the perfect setting for the designer’s collection.

Garden of Eden
The stage was composed of exotic flowers and plants, including many Anthurium, and the audience was welcomed by the sound of birdsong that gradually changed into chirping crickets.

Sarah Dikker (Holland’s Best Flower Stylist) had transformed the catwalk into an exotic setting with six colourful towers of flowers and plants. She used Anthuriums, Strelitzia, Orchids, Cyclamen, Celosia and Medinilla, which were made available by growers of Royal FloraHolland. 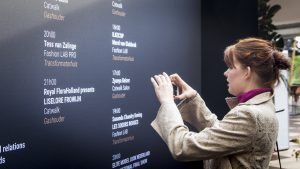 Anthurium Eterno cockscomb
There were many beautiful beehive hairstyles on the catwalk, adorned with floral accessories made from numerous Anthurium flowers. The Anthurium cut flower Eterno® , supplied by grower Fiore Anthuriums, was positioned in the hair like a cockscomb, playing a major role in the models’ hairdos.