In the cultivation of Anthurium and Phalaenopsis, several fungi and bacteria can cause damage to the crop and subsequent plant failure. In this article, we are focusing on the fungus Pythium (root rot). 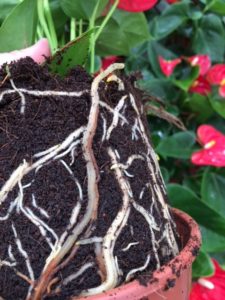 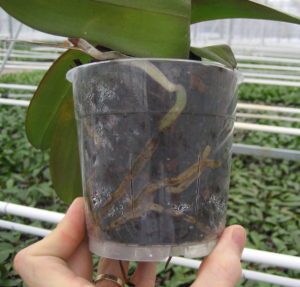 What is Pythium?
The Pythium fungus belongs to the class of oomycetes. These fungi spread via zoospores (swimming spores) in water or as mildew together with the substrate. The swimming spores swim to the root where they form a germination tube. This germination tube can penetrate the root directly via enzymes.

Root rot due to Pythium
A Pythium infestation usually starts at the roots. First, the root tips turn brown, and then, the rest of the root follows. The most obvious symptom of Pythium is the rotting of the cortex (primary bark between the central cylinder and the exodermis). This exodermis hangs like a bag around the central cylinder. When several roots are affected, the plant growth will lag behind and the leaf will turn yellow, as insufficient nutrients are supplied from the root.

Fusarium due to Pythium
Because of Pythium root infestations, the Fusarium spores present have a gateway to penetrate the plant. Fusarium is known to often require a wound (opening) to infect the plant. As indicated, Pythium does this on its own via the zoospores. Once in the plant root, Fusarium can gain the upper hand. The plant is lost due to Fusarium, even though Pythium is the actual cause of the problem. This can also lead to an incorrect analysis of the problem, and therefore the wrong approach to solving it.

There are many different kinds of Pythium. In DNA analyses of water and rotten Anthurium and Phalaenopsis roots, we often find:

Pythium ultimum seems to be the most common, but it is unclear to what extent Pythium dissotocum is harmful to Anthurium and Phalaenopsis.

Cause
Pythium is a weakness parasite and possible causes can be found in factors such as: 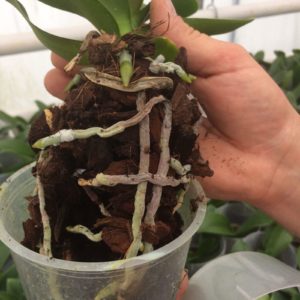 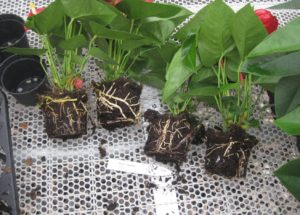 The cause is often a combination of the above factors and the degree of mould pressure plays a role in this. When Pythium is found in an analysis, it is often not the case that problems with root rot arise at the same time. But when the plants grow under deteriorating conditions and Pythium pressure increases, the fungus can strike.

Reasons for increased mould pressure may be:

Measures
1. 1. Hygiene
Pythium can grow on organic material (such as substrate, algae and crop residues) on the ground. It is therefore important to keep the substrate on the floor clean, particularly when water is reused.

In the greenhouse, substrate or plant debris almost always ends up on the ground or stays behind on the floors. Remove these crop and soil residues from the greenhouse quite regularly, so that the breeding ground of the moulds is removed. In addition, keep the concrete paths, facades and cloths clean and treat them with an anti-algae agent to prevent the formation of algae. Residual traces can even survive in dry conditions for months, allowing the disease to strike at an unexpected moment.

2. Disinfection
For pythium, too, prevention is better than cure. Cultivation hygiene remains an important measure in the fight against Pythium. This is eespecially important when recirculating water. This water is almost always disinfected, but it is better to ensure that the amount of spores in the drain water is also low.

In order to ensure proper disinfection, it is important to check regularly that the disinfection methods and/or facilities are working satisfactorily. Improved disinfection can often be achieved by measures or installations such as an extra sand filter, carbon filter, hydrogen peroxide dosage for the UV disinfectant, and aeration of water. When disinfecting, also think of the A and B containers for fertilizing. Analyses indicate that this water can be heavily polluted.

Also regularly check the growth of organic matter in the pipes. You should also have the water analysed for CFU (colony-forming units) fungi.

3. Healthy root environment
It is important to keep the root environment healthy: there must be a good balance between the different substances and organisms in the root system. Soil life contains a complex society of different organisms such as bacteria, fungi and bacteriophages. This microflora actively combats unfavourable bacteria and fungi.

Be aware of the fact that useful fungi, bacteria and other organisms can also be killed by oxidizing substances such as chlorine dioxide and hydrogen peroxide. In Phalaenopsis cultivation, relatively high values (20 ppm – 80 ppm) of hydrogen peroxide are included. In Anthurium cultivation, too, more and more attention is being paid to adding hydrogen peroxide to the irrigation water. This is a good development when it comes to removing the breeding ground for fungi such as Pythium from silos and pipes.

In order to prevent good organisms from being killed, it is possible to choose to dose these biocides only in the last 3 l/m² of the total irrigation session in Phalaenopsis cultivation. This requires adjustment of the irrigation strategy. Also be aware of the dosage level. To keep clean pipes clean, a low dosage (2 – 5 ppm) is usually sufficient.

4. Climate
A high substrate or root temperature is also mentioned as a possible cause of Pythium infestation, usually in combination with overly wet cultivation conditions. Other climatic conditions may also give rise to more problems. Changes in the activity of roots and plants as well as stress due to climatic conditions must be avoided.

For Anthurium it is important that there is good evaporation in the morning. The root temperature is often a bit higher because of heating in the floor or underneath the tables. When the plant evaporation is moderate (e.g. because of a lower plant temperature) the root may become vitreous, which makes it easier for the Pythium traces to infect the root.

In short, it is therefore important to:

5. Preventive measures
When Pythium pressure increases or is always found in the analyses, it is sometimes necessary to use preventive Pythium-fighting measures (see box). One tried and tested method is to irrigate with a fungicide shortly after potting or just before planting the plants.

6. Feasibility
Finally, we would like to point out that keeping the root environment healthy and increasing plant resistance are also necessary measures to prevent problems with Pythium (and Fusarium). Bio-life-stimulating or other biological products and/or useful fungi (such as Trichoderma harzianum) can provide added value. But the plant itself is also able to control the microflora in the root environment and thus build up a healthy resilience.

Conclusion
If these measures are observed, the risk of root rot and plant failure is limited. If problems with Pythium arise or increase, you can always contact Bureau IMAC Bleiswijk BV for advice.