Before we can talk about plant activity, it is a good idea to explain what this means exactly. It sometimes seems to be a bit of a buzzword: the plants and the climate must be ‘active’. An active climate is, in fact, a greenhouse climate that is capable of removing moisture. In line with this, we can also apply this to plants: an active plant or an active crop is capable of evaporating.

Importance of evaporation
There are a lot of reasons why it is important that a plant has a chance to evaporate, although the evaporation may not become an aim in itself. A plant can also lose too much moisture, which could be at the expense of growth (building up of dry matter).

Evaporation by the plant, however, is necessary. It encourages water flow in the plant, through which it can absorb essential nutrients from the substrate and subsequently transport them to the leaves and growth points. Additionally, evaporation ensures the cooling of the plant, which is necessary if there is a lot of irradiation. If the temperature of a plant increases too much, its growth will stagnate.

When the plant evaporates, the stomata must be open. This is a very important condition for the uptake of CO2. An active crop is also capable of absorbing a lot of CO2.

Influences
To what extent a plant can evaporate and take up CO2 depends on a number of factors which are mainly related to the greenhouse climate. When we talk about evaporation, we usually mention in the same breath the so-called stomatal resistance. This is a factor that regulates the opening of the stomata. A low resistance means that the stomata are open to the maximum and that there are no obstacles to evaporation and/or CO2 uptake.

VPD
An important influence on stomatal resistance is the VPD, an abbreviation of ‘Vapour Pressure Deficit’. This is the difference between the vapour pressure of the air in the stoma (where the air in the stoma is saturated) and the vapour pressure of the greenhouse air. The vapour pressure deficit is expressed in Pascal (Pa) or kilopascal (kPa = Pa divided by 1000). The VPD depends on the amount of moisture present in the air and the temperature (the moisture deficit) and the temperature of the plant. At a high plant temperature compared to the greenhouse temperature, the VPD will increase, because the absolute humidity at the stoma increases. Thus the difference between the stoma and the surrounding air is much bigger. In the cultivation of Anthurium, it is assumed that a VPD of between 0.8 and 1.2 kPa is a good value. At a VPD of under 0.5, too little exchange takes place between the stoma and the greenhouse air and above a VPD of 1.5 the stomatal resistance increases a lot and they will close.

In short, you can state that when the humidity of the greenhouse is high (above 70% for Phalaenopsis and above 75% for Anthurium) the plants open the stomata more easily. Below this value, the crop will arm itself against a possible loss of moisture and close the stomata. Also, when the temperature of the crop increases, for example because of sun radiation, the plant evaporates much more easily. This causes the VPD to increase, after which the stomata will close.

VPD is an excellent way of estimating to what extent the stomata are open and whether we are dealing with an active crop or not. The VPD that can be read on the climate computer is a calculated value that combines the temperature and the humidity of the greenhouse air with the plant temperature. However, control according to VPD in plants with a CAM photosynthesis is not possible. As the stomata are predominantly closed in the daytime, the plant temperature will almost always be higher than the greenhouse air and hardly any evaporation takes place. Therefore, a VPD calculated on the climate computer will give a distorted image in Phalaenopsis and cannot really be used as cultivation control.

Plant health
The influence of the climate on plant health is quite substantial. In the first place, it affects the growth processes of the plant. When the humidity of the greenhouse air is high, this will generally have a positive effect on the growth of the plants and thus on production. The only drawback is that fungi and bacteria also grow better in moister conditions. This should not cause any problems, but it is necessary that the greenhouse climate can get rid of the excess moisture so that the plants also have the chance to evaporate. We create an ‘active climate’!

The root activity is stimulated by the plant’s demand for moisture. When the plants can continue evaporating, the roots will continue to develop and stay active. This will keep them healthy. Moreover, a plant with a healthy root system is much more resilient and more resistant against diseases and pests.

Condensation
Besides the possibility of the plants to evaporate, it can also occur that in a less active climate the crop ‘condenses’: moisture from the greenhouse air condenses on parts of the plant or flowers, which can lead to fungal disease, such as Botrytis. When the plant temperature remains up to standard and there is sufficient space to evaporate, this will not occur. 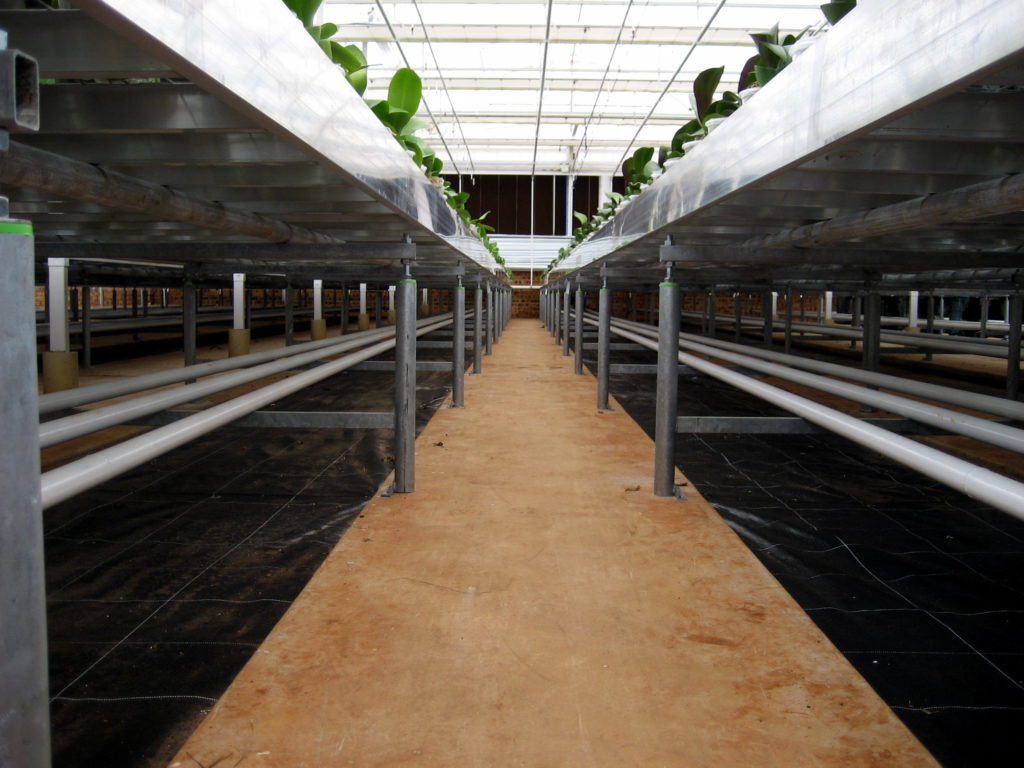 Moisture removal
Firstly, we mentioned that an active climate mainly implies that the plant can evaporate. In this context, it is important that moisture can be removed from the greenhouse (moisture loss), either by means of condensation (against the greenhouse cover) or via the vents. In addition, gaps and openings in the greenhouse structure also ensure moisture loss. However, this occurs less and less often in today’s modern and much more hermetic greenhouses. Moisture removal can be stimulated actively by using the heating, which in turn heats the greenhouse air that will consequently rise.

Counter air
Nowadays the bottom screen is often closed to save energy. To facilitate the removal of moisture, a gap can be left in the screen. However, a disadvantage of this method is that there is a chance that temperature differences (cold downdraughts) in the greenhouse occur, alongside the fact that energy is lost. For example, by ventilating earlier and also setting a ‘counter air’, moisture can be removed from the greenhouse in a more efficient way without having to leave a gap in the screen. An energy screen also allows moisture to pass through at approximately 50 g/m²/hour. 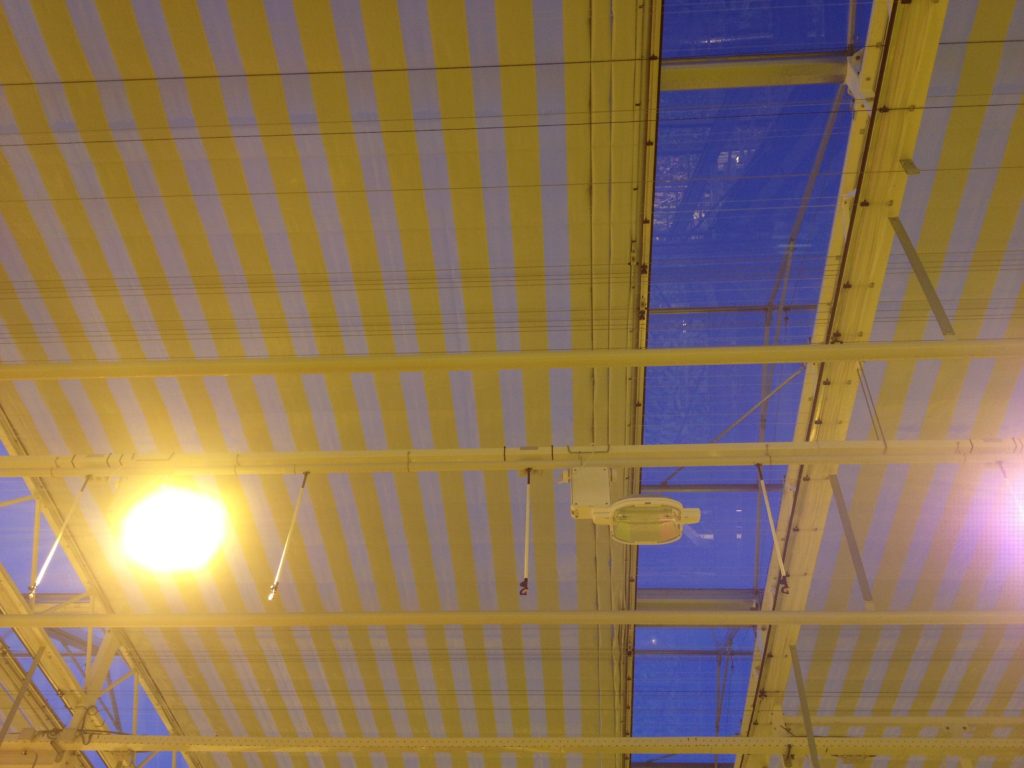 Plant temperature
When the crop has a higher temperature than the greenhouse air, it is easier to remove the moisture. Compare it to a pot of boiling water standing in the fog: after a while the pot will boil dry, despite the saturated air. The crop can be heated up by means of irradiation or lighting.

Heating pipe  below the tables
The crop and/or the substrate is heated with a heating pipe below the table, thus triggering evaporation. One might say that more moisture is ‘made’ in the greenhouse than removed from it. This removal occurs by increasing the top heating. This causes the air to rise and to condensate against the cover or to be removed through the opening in the vents. It is very important that there is a balance between the heating below and above the table in order to optimize the action of the climate and the plants. The influence of the radiation and the difference in temperature and moisture in the greenhouse and outside also have to be taken into consideration. 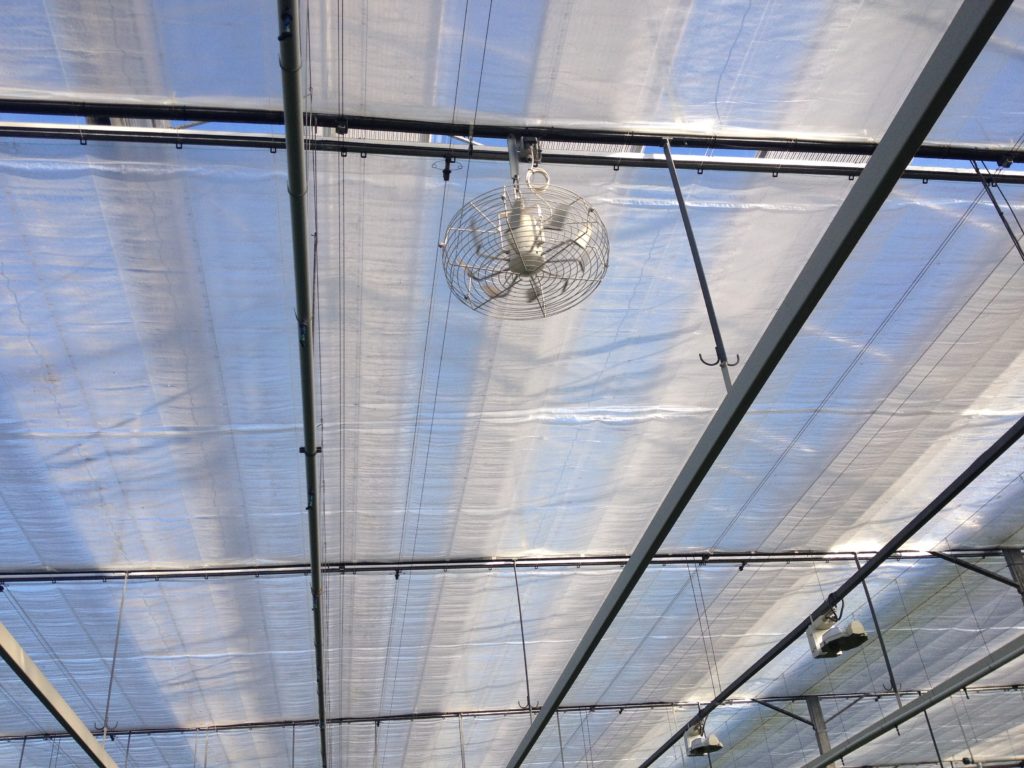 Fans
With the arrival of ‘Het Nieuwe Telen’ (The New Cultivation), fans made an appearance. Many of these fans are situated vertically, thus moving moist air upward and dry air downward, without this leading to huge energy losses. The horizontal fans are important to distribute the temperature and the moisture properly in the greenhouse and to allow the plant temperature to come more into line with the greenhouse temperature. By means of flow, energy transfer takes place between the plant and the greenhouse air, or vice versa.
Reasons enough to stimulate plant activity for good plant health and growth!