Measurement is the key to knowledge

The cultivation of crops in the greenhouse horticulture sector requires optimal control of the greenhouse climate. The circumstances under which a crop grows, must  be as ideal as possible for a cultivation to be as cost-effective as possible. Good control of the greenhouse climate is only possible when there is close monitoring of the climate factors such as light, temperature and humidity, incoming and outgoing radiation and the CO2 level of the greenhouse. Things like temperature and moisture are already measured in most greenhouses. These are the basic measurements that are absolutely necessary. In this article, specific attention is paid to the sensors that measure climate control to the next level. You will also gain more insight into the measuring process.

Light and radiation meters
The amount of radiation or light can be measured both outside and inside the greenhouse. An outdoor meter is common practice, which measures the global radiation. Both the light and the heat radiation are measured and the so-called ‘global radiation’ is expressed in watts per square meter (W/m²).

The next step is measuring the amount of light in the greenhouse with a light meter, also called a PAR meter. This meter measures the light inside the spectrum (400-700 nm) with which the plant grows best or the photosynthesis is highest. In reality, the amount of light particles (photons) per time unit for a certain surface is measured and expressed in micromoles per second per square meter (µmole/s/m²). With the measurement of an indoor PAR meter it is possible to screen with much more precision and to monitor for the optimal light level and the optimal light sum.

NOTE: As PAR meters can start deviating easily, it is advisable not to control the screens directly based on the PAR meter, especially in the beginning, but start off by observing and monitoring on the basis of the outdoor radiation meter. 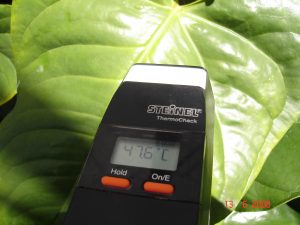 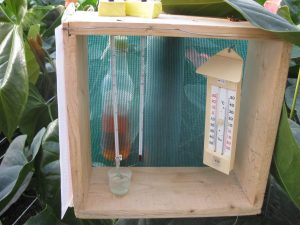 NOTE: The camera has a fixed position. In the event of a mobile cultivation system, it may be that the place where the camera measures is empty, which will lead to the wrong measurement. Monitor this closely at all times! 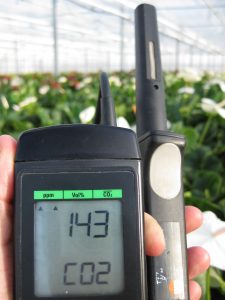 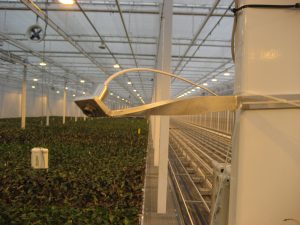 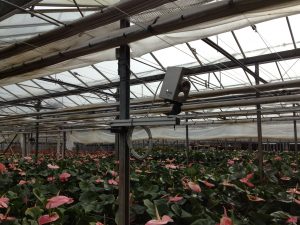 If the outgoing radiation is too high at a certain moment, you might decide to close the screens to prevent the greenhouse and the crop from cooling down. With a pyrgeometer it is possible to really anticipate this cooling, compared to an infrared meter. Another application is to determine whether the weather conditions are clear or cloudy. If the outgoing radiation is low, it can be assumed that it is cloudy. The incoming light is then largely diffuse. This allows you to let the screens work in another way. With diffuse light it is possible to allow the entrance of more light than with direct light.

Sensors above the screen
Sometimes it is hard to establish at which point in time a screen can be opened or to what extent venting is necessary. When it is known what the temperature and humidity are above a closed screen, a more accurate assessment can be made of the consequences of opening a gap in the screen, opening the screen and/or using the ventilation. This is a very good way to further refine the greenhouse climate control. When, for example, the absolute humidity (AH) is lower than that of the greenhouse air around the plants, it is easy to dehumidify by opening a gap in the lower screen.

Weighing devices
During the cultivation of pot plants an electronic weighing scale can be used. These scales weigh several pots constantly, as a result of which a good representation can be given of any decrease in weight due to evaporation. This is an extra tool to help determine even better when irrigation is due. The measurement is generally transmitted via a Wi-Fi network to the climate computer.

Plant sensors
In the cultivation of Phalaenopsis in particular, plant sensors are sometimes used to determine whether the plants are feeling ‘comfortable’. A sensor is connected to the leaf, measuring the fluorescence (light reflection). By measuring the exact amount and colour of the reflection of the leaf, it is possible to predict the extent of photosynthesis by the plant at that moment. This all sounds great, of course, but the interpretation of these figures is not easy. Often the measured values are compared to a model that has been reached from a large number of photosynthesis measurements. This comparison then shows a value for the photosynthesis.

NOTE: Often only one plant or one piece of leaf is measured, which has to represent an entire department or greenhouse. In addition, the plant processes are directly influenced by the measurement. It is not easy to draw conclusions about plant growth on the basis of this measurement, though there is no doubt that it can be an excellent addition to all the other information acquired from the sensors. 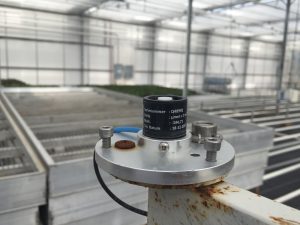 Porometer
A porometer is a device that can determine the exchange of gas of a leaf. It is a hand meter, so it is used to measure a certain moment in time. It is a beautiful tool to learn how the plant copes with the circumstances of that specific moment in time by taking several measurements at other times under other circumstances (think of light level, temperature, humidity, CO2 level, etc.). On the basis of this measurement an estimate can be made of the plant assimilation at that moment.

Control and calibration
It almost goes without saying, but it is very important to remember that measurements are actually an accurate representation of the situation at a specific time. The measurements of all measuring equipment, no matter how advanced, can start deviating over time. Light meters (PAR sensors) are the most sensitive to this. It is therefore very important to be completely sure of the accuracy of the measured values by checking the sensors for contamination and controlling them yourself. In addition, it is advisable to have the PAR sensors calibrated at least once a year and the other sensors once every two years.

This article has been written in collaboration with Bureau IMAC. If you want to know more about this subject, please contact Bureau IMAC.

Anthurinfo
This article is part of the Anthurinfo nr. 1 -2017. Read all articles here.