Recent research has shown how plants can be activated and that plants perform better at the combination of higher temperatures and, at the same time, a higher relative humidity (RH) than we have been used to so far. When a higher greenhouse temperature is kept, the greenhouse is ventilated less frequently and more CO2 stays inside. This has the advantage of increasing assimilation. For this increase to take place, more light (=energy) is needed. More light can be allowed in, but the plant must be able to effectively use this extra light. By combining the knowledge of physics with that of the plant, cultivation can be even further optimized.

Activating the crop
During the day, the sun delivers the energy which is necessary to keep the plants active. Photosynthesis takes place and there is sufficient evaporation. At night, and when there is too little incoming radiation during the day, the situation is different. Sunlight has to be compensated to activate the plants. This implies that crop evaporation has to start and has to be kept going. In the case of low relative humidity there is relatively greater evaporation and this is referred to as an active climate. In the case of a higher relative humidity, the possibility of evaporation is more limited and the climate must be activated artificially.

Types of evaporation
Most evaporation is caused by radiation. This can be compared to the steam that is released by a whistling kettle. Radiation heats up the water in the plant, which is released through the stomata. 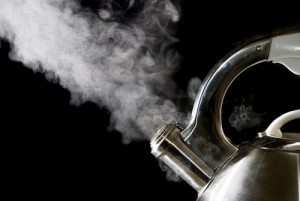 Evaporation in the case of radiation (whistling kettle evaporation).

Air that is warmed up and gets warmer than the surrounding air tends to rise. This ascending movement is called convection. Evaporation by convection is the ‘wet bulb’ evaporation, which can be compared to drying laundry. Convection evaporation is independent of radiation. This evaporation can take place during the day as well as at night. The heat required for this is delivered by convection. 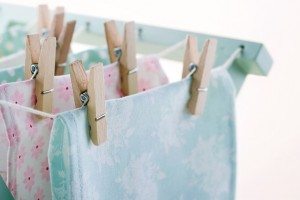 Convection
The plant can absorb and emit energy by convection. This occurs when the air in the greenhouse flows along the leaves of the plant and there is a difference in temperature between the leaf and the air. When the leaf is warmer than the greenhouse air, energy is released; when the leaf is colder than the greenhouse air, energy is supplied. The air movement is an important factor in this whole process. When the air is still, the temperature of the leaf and that of the directly surrounding air (the so-called boundary layer) are identical and there is no longer any net energy exchange. The higher the airspeed, the larger the energy transfer.

In the case of insufficient radiation, evaporation must be guaranteed through convective evaporation. At low relative humidity, quicker sufficient evaporation is possible. Thanks to air movement, it is possible to enable energy transfer through convection. This will allow the crop to keep evaporating at a higher relative humidity as well. An active growth climate starts with sufficient air movement around the plant. An additional advantage is that temperature differences are reduced and that no fluid accumulation around the plant can take place. 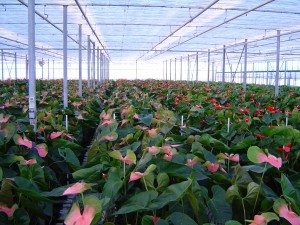 Anthurium cut flowers in a greenhouse with closed screens

Higher temperature and higher relative humidity (RH)
It has become clear that plants perform better with the combination of a higher temperature and a higher relative humidity. In other words: plant stress can often be better controlled with a higher RH. Intensive sunlight combined with a low RH quickly causes stress in a plant because the plant cannot make up to a sufficient extent the loss of water through evaporation. At a higher RH a plant can often grow better because evaporation is reduced and CO2 can be absorbed better. This generates more assimilation and thus more growth. Anthurium is not able to absorb much water. Therefore it is important to limit evaporation.

Most plants release radiant heat for approximately 60% through evaporation. Plants can also release excess energy by outgoing radiation, reflection and convection. As long as the balance, i.e. the difference between supply and release, is positive, the plant experiences the climate as ‘active’. The energy balance is positive and the plant can use the surplus energy to keep the evaporation going.

With the position of the stomata, the plant itself regulates the leaf temperature and, at the same time, the proportion between convection/radiation and evaporation. When the stomata close, the plant temperature will increase too much. The photosynthesis will be inhibited when the stomata are closed because the plant cannot absorb enough CO2. 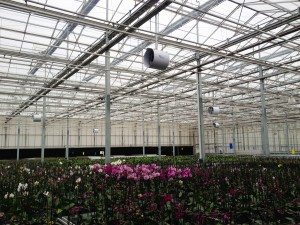 Ventilator in a greenhouse where phalaenopsis is cultivated.

With a higher greenhouse humidity level, the plant can process more incoming radiation. This is a consequence of the fact that a plant will evaporate less water in this situation. It creates less rapidly a shortage of water as a result of which the crop is able to continue regulating the release of temperature through evaporation for longer. By ‘squeezing’ instead of closing the stomata, more incoming radiation can be used for assimilation and a larger share of the heat will be emitted by convection.

By using high pressure atomization, amongst other things, more heat is extracted from the air in the greenhouse by the water applied. Keeping a higher temperature and RH in the greenhouse implies that ventilation is required later and that more CO2 stays in the greenhouse, as a result of which assimilation is increased. If it is not possible to keep the RH up to standard, screens will have to be used earlier in order to prevent the plants from suffering stress (source: *). 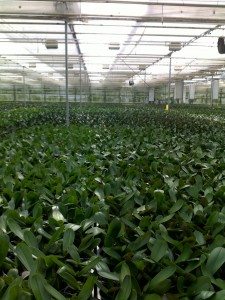 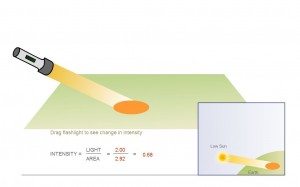 Winter climate and winter leaf
In the winter, the incoming radiation until the shortest day decreases considerably because of the lower position of the sun and the higher cloud coverage in Holland and in the countries situated further away from the equator. As a result, at the beginning of the winter more incoming radiation can be allowed, but light sums will decrease nevertheless. Because of lower light sums, growth decreases substantially, as a result of which weaker leaves are formed. Because Anthurium and Phalaenopsis do not grow that fast, the leaves that are formed in the winter will start to develop towards the spring.

A few weeks after the shortest day, the incoming radiation increases considerably by a combination of the higher position of the sun and decreased cloud cover. This means that around February much more energy reaches the crop than at the time when the leaf is formed. The winter leaf that is already present on the crop is often not able to process this increase. Therefore, screens should be used at this time already with lower radiation in order to allow the crop to familiarise itself with the greater amount of incoming radiation. With the changeover to more radiation, the crop will be able to process the radiation better if the moisture content in the greenhouse can be kept high.

A better understanding of physics together with knowledge of the plant will allow you to improve climate adjustments and thus optimize cultivation.

This article was written in collaboration with Bureau IMAC. If you require more information or additional advice, please contact Bureau IMAC.